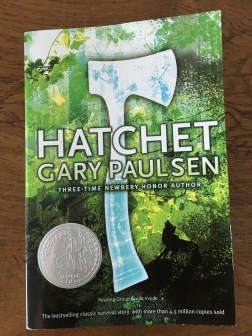 “… he learned the most important rule of survival, which was that feeling sorry for yourself didn’t work. It wasn’t just that it was wrong to do, or that it was considered incorrect. It was more than that – it didn’t work. When he sat alone in the darkness and cried and was done, all done with it, nothing had changed. His leg still hurt, it was still dark, he was still alone and the self-pity had accomplished nothing.”
–  Narrator

I was seven when I watched a black and white movie called “The Incredible Shrinking Man.”  It was about a chap called Scott who started, and could not stop, shrinking. He became so small that no one could hear or see him. He was completely alone, fighting off his pet cat, killing a spider with a pin, trying desperately to survive. It was terrifying. As a result, I approach survival stories like Hatchet with great trepidation.

Brian is 13 and wrestling with his turbulent emotions in the aftermath of his parents’ divorce. He is on his way to stay with his dad in the Great Canadian North for the summer when the pilot suffers a heart attack, leaving Brian completely alone to fend for himself.

The author takes us into Brian’s head, into his feelings and thoughts, expertly interspersing Brian’s stream of consciousness recounting with the more detached voice of an unidentified narrator.  The two voices slip and slide effortlessly from one to the other, and then back again, telling not only a gripping tale of survival, but of Brian’s coming of age in the wilds of Canada.  I couldn’t help thinking that if I was lost in the wilds, stripped of all but my self and my will, my story would end much sooner, and like the Incredible Shrinking Man, leave an unpleasant aftertaste.  Brian’s story ends on an extremely satisfying note, and lingers with you for long after.