“King Mansolain had a beard that spread about his feet like a rug, and on it slept a hare, the only creature that still cared for him now that King Mansolain was almost forgotten.” 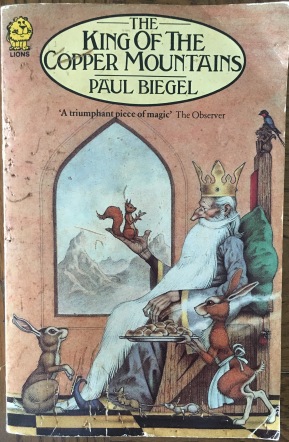 My beloved copy of The King of the Copper Mountains bears teeth marks made by my first ever pet dog.  Patches was a Shih-Tzu with one blue and one brown eye. She had the unsavoury habit of tracking down cockroaches and stifling the blighters by rolling over them.  If she could have talked (and as a child, I fervently wished that she could have), I suspect she’d have had many engaging stories to tell.  Like the animals in Paul Biegel’s classic tale who come to the copper castle to keep King Mansolain alive.

The king is over a thousand years old, and ailing. The hare, his anxious carer, summons the Wonder Doctor, who delivers a grim prognosis. The king’s death is almost certain.  But if the doctor can find a rare plant called the Golden Speedwell and make a rejuvenative elixir from it, King Mansolain could have a new lease of life.  Until then, it is imperative that the king’s heart be kept beating with a daily supply of exciting stories.  The Wonder Doctor hastens on his quest and spreads the word of the need for storytellers as he goes on his way.

Soon enough, visitors appear, one by one, at the doors of the copper castle. Each bears a life-giving tale, each wants to share it to help keep the king alive.  It is a motley crew that includes a fearsome green-eyed wolf, a graceless duck, a noble lion, ten musical bumble bees, a pitiful donkey and a gruff dwarf.  The stories range from the autobiographical (the squirrel recounts the time he is lost and his father enlists the aid of a giraffe to find him) to the melancholy (the rabbit-of-the-dunes narrates how his brother was lost at sea and how he continues to mourn for him) to the fantastical (the three-headed dragon relates the tale of how he manages to escape from the clutches of an evil witch who he crippled).  After each story is told, the hare listens to the king’s heart, placing his ear under the blanket of white beard.  He sighs with relief that another day’s grace has been granted.  All the animals retire into uneasy and suspenseful slumber: will the Wonder Doctor find the precious Golden Speedwell and make it back in time?

Will the elderly king be saved?

Only many years later did I realise that I had been reading the English translated version of The King of the Copper Mountains.  The original was in Dutch, and its author, Paulus Johannes Biegel (1925 – 2006) had been a prolific and successful children’s author in his native Netherlands.  This explained the unusual names of the characters (such as Idur, Mee, Snook and Nemosh), the atypical turns of phrases and the familiar echo of Hans Christian Anderson in each of the animal’s tales.  The book had been written at a time when anthropomorphized animals were all the rage, at least for me. I saw rabbits, and thought of Brer Rabbit. Hamsters reminded me of Hannibal, mice were as daring and brave as Ralph (the hero in The Mouse and the Motorcycle), and bears ate porridge and went for walks in the woods.  It was a golden age when every living creature – and sometimes even inanimate objects – had a voice and a story to tell, and those stories were life-sustaining.  In this electronic age, perhaps if we stop and take our eyes and ears away from our devices for even a minute, we just might hear them.