“He saw the garden at many times of its day, and at different seasons – its favourite season was summer, with perfect weather.” 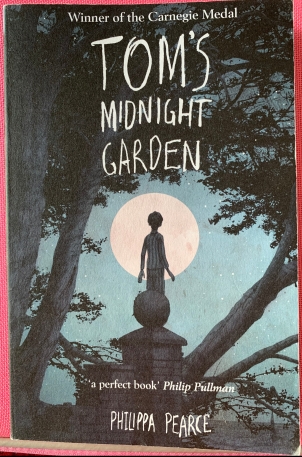 With just two upturned dinner chairs and a few blankets, my kids can create a cosy hideout, away from prying adult eyes, in which to hold secret readings and from which to execute dastardly plans. This desire for a lair is universal. So it is with Tom Long, the pajamaed hero in Tom’s Midnight Garden, who longs for company and a place to play.  In this classic fantasy tale, Tom finds not only an garden hideout and an exciting new playmate, but an intriguing and secret existence in a parallel past-universe.

Tom’s well-meaning parents have forcibly exiled him from the family home to protect him from catching the measles from his younger brother. He is sent to stay with his stern and proper Uncle Alan and his kindly but docile Aunt Gwen at their flat, one of several subdivisions of a large, unwelcoming old house. The prospects for the summer holidays are gloomy.  The ticking grandfather clock that stands on the ground floor hall (the lynch pin of this story, as we will soon discover) temporarily piques Tom’s interest, but he soon becomes an insomniac, unable to sleep for the misery at being parted from his family, in particular his brother and their outdoor summer plans.

It is during one of these sleepless nights that Tom hears the grandfather clock strike thirteen. Unable to contain his curiosity, Tom slips out of bed, still clad in his striped pajamas, and creeps downstairs. He inspects the clock but he needs more light to see, so he tries opening a back door to let some moonlight in. The door is supposed to lead to a poky backyard but it instead reveals a lush garden, with flower beds, bushes and towering trees. A greenhouse sits in the distance, and beyond that, more trees. A garden that no one has told him about! Excited by his discovery, Tom reluctantly returns to bed but not before an encounter in the hall with a ghostly housemaid, dressed in Victorian-era clothes. She cannot hear Tom, or see him. In fact, the entire hall looks different, crowded with stuffed animals, paintings and hunting equipment. Inexplicably, the scene dissolves and the hall returns to normal, as Tom, perplexed, heads for his bedroom.

In the days and weeks that follow, Tom discovers that the garden behind the back door exists in a world from the past, appearing only at night and during that bewitched extra hour that the grandfather clock chimes in.  The garden and everything in it is real to Tom but he discovers that he is not real to the garden’s world, nor to its inhabitants. No one can see him, or hear him. Not the gnarly gardener, Abel, nor any of the three Melbourne boys who play in the garden. And neither Hatty, the little girl with long hair and sparkling eyes, who, ignored by her boy cousins, is as unseen and unheard as Tom. Or so he thinks, until Hatty confronts Tom and introduces herself as Princess Hatty.  She has, unlike the others, seen him all along. In the manner of desperately lonely children when they find a kindred spirit, Tom and Hatty become instant playmates. Hatty’s world becomes Tom’s secret playground.

As Tom and Hatty’s friendship deepens, their parallel worlds begin to dislocate in time. Hatty grows older than Tom, overtaking him to become a young adult while he remains the pajama-clad little boy when they first met. Another clock is also ticking: Tom’s visit at his aunt and uncle’s is drawing to a close. Will he solve the mystery of the midnight garden or will he lose Hatty forever?

Written over 60 years ago, Tom’s Midnight Garden is a fascinating and gripping tale. The elegant prose is ageless, as are the themes explored – separation, loneliness, friendship, loss, reconciliation and acceptance – in a mysterious secret space that is all one’s own.  Come to think of it, very much like getting stuck in a very good book.

Postscript: The graphic novel adaptation by Edith (whose full name and identity I have been unable to ascertain even in this Internet age) is faithful to the original text and an equally compelling read.