“The Bland Sisters look forward most to the evenings, when they entertain themselves by reading the dictionary to each other, then staring at the wallpaper until they fall asleep.” 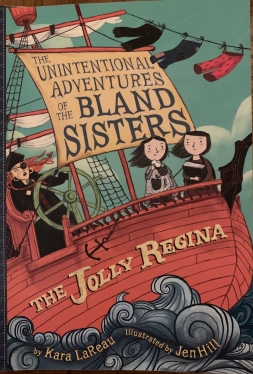 Several years ago, the Senior Blands went to run an errand. They never returned. Their two children, Jaundice and Kale (their real names) could have gone on a tear, thrown boisterous parties or played video games all day while eating crisps. They did not. Instead, the identical twin sisters fell into a routine that included darning socks for a living, reading a dictionary for pleasure (as well as for knowledge and insider tips), watching grass grow and consuming cheese sandwiches. The Bland Sisters loved their introverted, predictable, simple and efficient lives. Until a knock sounded on their front door.

M: Can you tell me what happens to the Bland Sisters when they open the front door?
B: A pirate appears with a sack and she says …
M: It’s a she? Isn’t that unusual?
B: Oh yeah, it’s a woman pirate, so like a pirate-ette.
M: Ok, keep going.
B: Her name is Lefty and she only has one hand. The fake one is a hook.
M: Yikes. Scary stuff. And then?
B: Lefty says there is a surprise in the sack but there isn’t, so she puts the sisters in it and takes them away to a pirate ship called the Jolly Regina.
M: Are the girls scared?
B: Err, no, their reaction is sort of like, “how weird is this!”
M: Yes, they seem to be more annoyed at the chafing burlap fabric, don’t they. Then what happens?
B: The sisters meet all the pirates on the ship. The Captain is Deadeye Delilah, and the rest of the crew are Lefty, Millie Mudd, Fatima, Princess, Smokey and Peg. Fatima is the chubby one, Millie is the youngest on the ship, Princess has lots of tattoos on her body and Smokey always smokes a mermaid pipe.
M: Are they all bad people?
B: Yeah, except for Fatima and Peg. Wait! [whisper] Is that a spoiler?
M: I hope not. Let’s move on then.  What is your favourite part of the book?
B: My favourite part is when Fatima and the Bland sisters make a chantey to get back at Princess and Smokey who keep bullying Fatima.
M: Yes, they are quite mean to her because she binge eats hardtack and is rather large as a result. Who then is your favourite character in the story and why?
B: I think I like Peg best, because she’s a librarian with a peg leg and she’s one of the nice pirates who’s kind to Jaundice and Kale.
M: But of course, most librarians are delightful. Would you recommend this book?
B: Yeah, I would because it’s funny, maybe a little bit sad when they leave the pirates though.
M: Umm, that might be a spoiler.
B: Whoopsies. Anyway, I would recommend it also because there is a series so you get to read more stories about Jaundice and Kale.
M: Although I hear the third book might be the last in the series, sadly. Ah well. Nothing good lasts forever. It is extremely well written though, the author didn’t shy away from using words that might have been a little hard for younger readers. Were there lots of difficult words?
B: Yes, but at the top of each chapter, there was a definition of what one of the words meant. For the other words I didn’t understand, I asked you!
M: So I’m your walking dictionary as well now? Like the dictionary that Kale carried around with her, Dr. Nathaniel Snoote’s Illustrated Children’s Dictionary?
B: Yeah, but without the pictures [hugs].