Not only does Chinese New Year fall in early February 2019, but (according to various Internet sources) the entire month is dedicated to those who love libraries. I grew up in a bookshop-deprived town, so my main sources of the written word – literary or not – were the public library, the school library and of course, the libraries of friends.

As a child, my small bookshelf at home housed storybooks by Enid Blyton (I devoured all of them with a hunger like no other) and Tintin comics.  My treasure trove slowly grew as the years passed to include Asimov, Eddings, Pratchett, Hitchcock, Tolkien, Christie, Wodehouse, Eliot, Austen and pretty much any other English language paperback that I could find in the second hand bookshops that didn’t look as if it had been chewed up and regurgitated by Ringo the pet dog. The rare trip to Singapore with my dad when he went on business meant a pilgrimage to the holiest of holy places, Time Bookstore.  I’d be left sitting on the floor in the children’s book section for hours until my dad came to pick me up after his meetings.

We don’t visit public libraries as often as I used to as a child as Ben and Anna have a wonderfully stocked up school library, and they have a mother who can now release her pent-up desires from her childhood and buy books for our home library. There is a joy and comfort in being surrounded by more books than one can read, in basking in the company of old friends (and potential new friends) every day.

That being said, we’ve found some brilliant reads in libraries – including Keeper of Lost Cities, a thrilling middle grade series that has captivated Anna and that we now know has many, many fans; Home  and Coming Home, two beautifully illustrated picture books about the place(s) and people we call home; You’re a Bad Man, Mr Gum!, a wacky and laugh-out-loud funny early reader series that had Ben and I in stitches (and yes, it is also a series now); and Pax, a touching story about the enduring friendship between a fox and his boy during wartime.

Why not make every month library month? 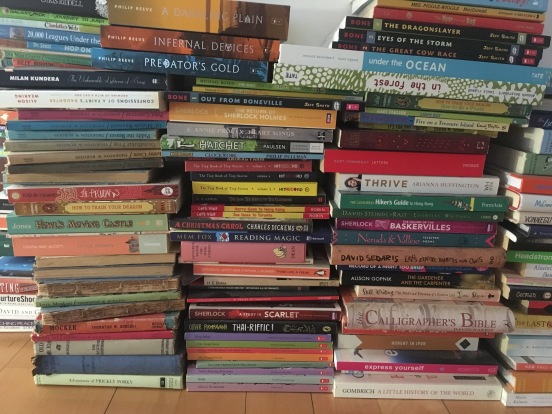 One of our many stacks of books, Hong Kong