“On the last morning of the holiday, everyone puts all their things back in their suitcases.  Violet takes the sheet down from the bunk bed and folds it up. One minute it looks as if her family actually lives in the beach house, and the next minute it looks as if they have never stayed there at all.” 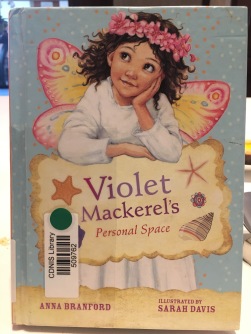 I had the pleasure of meeting and supping with the delightfully scintillating self-taught illustrator, Sarah Davis over a year ago when she was in Hong Kong. Sarah also ran an illustration workshop that my daughter Anna attended and loved, and that’s when I too, fell in love with her work.  Sarah’s beautiful drawings subsequently led me to Violet Mackerel, a charming early reader series that has similarly stolen my heart.

Violet is a kind, observant and thoughtful seven year old who lives with her mum and older siblings, Nicola and Dylan.  She is a somewhat understated heroine, but plucky and resourceful.  More importantly, she doesn’t have any super powers, nor does she wax lyrical about bums or farts or any other body parts/bodily functions.  She’s a little girl like my Anna was at seven, and that (I think) I was at seven too (mental note to ask my mum).

What is particularly endearing is that Violet comes up with not just one-off solutions, but generally applicable theories, to solve the problems that she encounters.  Like how to deal with the sadness at the end of a good family vacation, or how to deal with a brother who is protesting their mother’s remarriage, or how to deal with the inadvertent breakage of a garden fence.  She tests her theories carefully, and thoughtfully, on herself and the family and friends around her.  She’s a good scientist.

In Personal Space, Violet struggles with a move from their family home, and ultimately (though not specially phrased as such) the erasure of memories of her early childhood.  The painting over of the height chart at the edge of the doorway in their old house is a particularly searing moment.  But Violet has developed a theory about how to overcome this sort of sadness called the “Theory of Leaving Small Things Behind,” and she tests it cautiously. A piece of green tumbled glass here. A small red button there. A gold sequin tucked away behind peeling paint.  It works for her, and more importantly, it works for her brother Dylan, who is taking the change a little harder than anyone else in the family.

The author has created a loveable and relatable central character, and tells her gentle but ofttimes poignant stories in the present tense, using words that are deceptively simple and easy to read, but which I sense are the result of deliberate and careful thinking and mulling and honing over a long period of time. Just my “Theory of Art is as Beautiful as the Time it Took to Create It.”

Have I said that I absolutely adore the illustrations as well?

Sarah Davis is 3rd from the left.