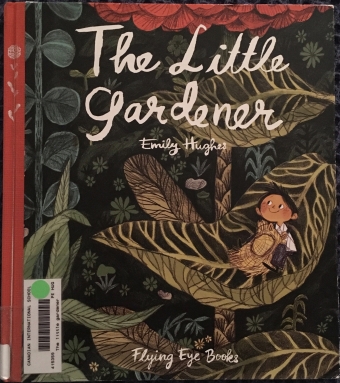 “This was the garden. It didn’t look like much, but it meant everything to its gardener.”

M: Do you think this picture book should be on our blog?
B: Yes.
M: Why?
B: Because it is interesting, cute but sad as well.

M: What is this book about?
B: It’s about this boy who has a garden and he’s trying to save it. He’s small, like really small.
M: How small?
B: Like as tall as a leaf, like this (shows picture), or as tall as my hand (shows hand).
M: Why does he want to save the garden?
B: Because he wants to save his friends, because if the garden is dead, he won’t get any food. and most of all he wants to save a tall flower, which is the only flower in the garden (flipping pages), no, it’s not, its the most colourful flower and big, but the other flowers are boring.
M: What do you think of the pictures? What do you like most about them?
B: I like the colours, and the way she (the author) drew the leaves and the bugs. If there were no pictures, it would be hard to understand what was going on. Like here (pointing to page), if there were no words, you’d think the girl was going to pick the flower instead of saving it.
M: How would you describe the boy?
B:  He loves gardening, he’s kind because he’s trying to save the garden and he’s a risk-taker because he is taking a risk to save the garden even though it is dying.
M: How old do you have to be to read this?
B: 5 or 6 maybe. If you’re 2 or 3, you won’t know how to read the words so someone would have to read to you. But you could know the story from the pictures, so maybe 2 years old as well.

Mum’s take: A lushly illustrated picture book which tells the story of a diminutive gardener, who against all the odds, rescues his beloved garden from destructive weeds, insects and snails. A timely parable for our troubled times: look for hope however small, unite around that hope, and join forces to do the needful.

One thought on “The Little Gardener by Emily Hughes”