If your middle grade child can still remember the first few lines of a board book that she had read to her since before she could walk, it must be a bit of a gem. That is what Each Peach Pear Plum is, the perfect rhyming “I Spy” picture book for really little ones and their sleep-deprived care-givers. 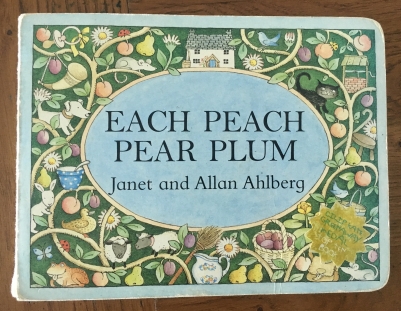 The board book in my hand is over a decade old, its edges fraying, deep furrows along the spine.  The story itself is even older. Each Peach Pear Plum celebrated its 40th birthday in 2018 as the author, Allan Ahlberg celebrated his 80th.  Ahlberg is a maestro of rhyme, and a prolific children’s book writer, having written – at last count – over 150 books.

In Each Peach Pear Plum, the story begins on a bucolic summer’s day in a blue-sky orchard planted with peach trees, pear trees and plum trees. On the ground lies a basket of plums.  Two white rabbits play in the grass … and hidden among the peach tree branches, barely visible except for his shock of yellow hair and teeny tiny feet, is Tom Thumb, reading a book. There he is, after an afternoon of plum harvesting. Found him!

It’s like a game of tag as well as “I Spy” for now, Tom is ‘It.’  We follow him out of the tree and into a little cottage where he finds a cupboard and some delicious raspberry jam to get into, and we are next asked to spy Mother Hubbard.  This one’s a little harder as it isn’t immediately obvious where she is.  But look carefully at the picture of the cottage kitchen with its floral wallpaper.  Is she behind the blue door, next to the basket of plums (didn’t we see that somewhere before?), or is she next to the sink with its separate hot and cold taps?  Is that a tea cosy and a rolling pin on the chequered tablecloth? And what a cute dog having his lunch from his dog bowl.  But where is Mother Hubbard?

As you may have guessed, we find Mother Hubbard (her bright yellow dress gives her away) and we follow her to the next page, and so on and on, where we meet other familiar and well-loved figures from distinctively English nursery rhymes, fairy tales and folk lore.  The detail-rich watercolour and ink drawings are delightfully charming. I’m not sure if the illustrator, Janet Ahlberg (herself an extremely accomplished illustrator) intended to make this an “I Spy” book for a generation of older parents who grew up in a British colony. Probably not. But I triumphantly spy the (now vintage) Jacob’s Cream Cracker tin on the cellar shelf, the box of lard in the cupboard and the porcelain figurine of a man on a horse on the window ledge. I am sufficiently moved to revisit my Enid Blyton collection.

Deceptively simple, thoroughly engaging and wonderfully satisfying, Each Peach Pear Plum deserves all the awards that it has won and has guaranteed itself a place on our bookshelf for generations to come.  Where is your copy?