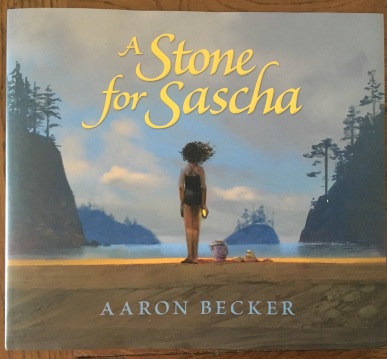 How does the loss of a beloved family pet tie in with the story of a cosmic rock that has been in existence since the world began?  You will have to savour Aaron Becker’s stunning wordless picture book, A Stone for Sascha, to find out, and I promise, you will be all the richer for it.

The only glimpse we get of Sascha the dog is in the opening photograph. The little girl, her hair a riotous tumble of brown curls, has her arm curled tightly around the wolfish pet, whom we see in side profile. The girl’s face is buried in Sascha’s fur. Two spreads over, the girl is now older, tall and lithe, and the family have dug a hole in the ground and placed a white bone at the bottom of it. The father cradles a bundle wrapped up in what is obviously a dog blanket as the girl clings to her mother, a bouquet of yellow wildflowers clutched in her hand. In typical fashion, the younger sibling – a brother – chases after a bright yellow butterfly, seemingly oblivious to the grief.  And as the sun sets, turning the sky into a mottled pink and blue canvas, the girl sits by the grave, and she cries.

The family leave for a camping holiday, but the girl is still wistful and burdened by her loss. As she searches for rocks on the beach where the waves crash onto the sand, she looks on enviously at a girl in the distance who is playing with her pet dog. There is a breathtaking picture of the girl, her arm pulled back, rock in hand as she readies to hurl it into the ocean, out towards the unknown depths and under the mysterious starry skies above. We feel the anger and despair and sorrow.

We are then whisked back into time, ancient time, to outer space. A fiery yellow ball of fire speeds towards the big blue marble that is our earth, and makes contact. The asteroid shatters into bright yellow pieces, which lie undisturbed on the ocean bed as the evolution of life continues in the waters and lands above. The sea creatures become dinosaurs. Then suddenly, the yellow asteroid shards are pushed out of their hiding place when a massive earthquake erupts and we are now on a map. We are in Egypt and it is 5000 BCE.

The yellow rocks, now conspicuous, are discovered by human hands. A big luminous menhir is harvested from the ground and transported on a long adventure through history and time, passing from hand to hand until finally reaching the San Juan islands off the coast of North America.  By the end of its journey, the once majestic obelisk is now a much smaller round yellow stone, still shimmering as brightly as it did when it first arrived on the earth many many moons before.  The girl on the beach, grieving for her lost pet, chances upon the smooth stone. Placing it against her cheek, it is as if the stone is whispering its story to her, that the universe is larger and older and more infinite than anything anyone could ever imagine.  It is as if the stone is comforting the girl, affirming to her that Sascha was once part of this universe and will always be of this universe. What a wonderful thought, and what a marvellous picture book.

For ages 5 and above.