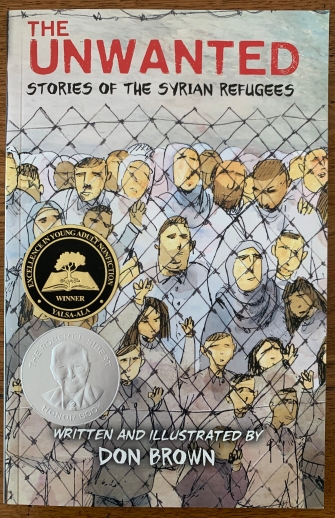 Horrifying thought: the Syrian crisis is almost as old as my son, who turns 10 later this year. As Ben becomes mature enough to understand and to bear some of the more grim realities of the world around him, I turn to The Unwanted, a powerful non-fiction graphic novel, to help him learn about the civil war that continues to rage in Syria, and from which millions of Syrians – gambling with their lives – have fled and continue to flee. Better the soulful pain of open eyes than the empty bliss of wilful ignorance.

M: Remember I asked you about the Syrian crisis some time ago, and you said you didn’t know what it was? After reading this book, do you think you understand what is happening in Syria?
B: Yeah, I think so.
M: Can you tell me in your own words, what you understand about the Syrian crisis? How did it start?
B: It started when the Syrian people didn’t like their government led by this guy called Assad. They protested against the government, and the government arrested people and even tortured them to stop them from getting dignity and freedom.
M: Sounds pretty awful. Did other countries support the Syrian people or did they support the Assad government?
B: Shia Muslims and even some Christians supported the government and even Russia, but the opposition is supported by Sunni Muslims, and also by Islamic zealots. What’s a “zealot”?
M: Well, zealots are people who are fanatical about something, and in this case, they are fanatical about their religion, so fanatical that you can’t disagree with them. It’s a real shame, the Syrian conflict has become a struggle between various groups, all of whom want to have power and control over the country.  Who do you think is the stronger of the two?
B: The government is stronger. They even killed, executed and tortured the Syrian people, and started a civil war, like the American civil war, which is when people in a country are fighting each other.
M: So now you know how the war in Syria started. What is the rest of the book about?
B: It tells about Syrians fleeing to Lebanon, Jordan, Turkey, Greece, Italy and other parts of Europe because of the war. You said they are not immigrants right?
M: Yes, they are considered refugees, as opposed to immigrants because they are leaving their country not out of choice, but because they are fearful for their lives. How did the Syrians who left their country feel?
B: The people were worried and scared, but they wanted to get jobs and live in a safe place rather than Syria where all the fighting was happening. In Turkey, when a lot of refugees fled there, the Turkish government gave them tents in a camp which was nice of them. In Lebanon, the Syrians stayed with friends and relatives.
M: So that’s where the title of the book comes from?
B: Yeah, the unwanted are the refugees because other people didn’t want them to come into their countries. They didn’t want to have to pay for the refugees and to look after them because the refugees had nothing. I don’t think it’s right for countries to turn people away when they need help.
M: It’s really quite sad isn’t it, when you aren’t wanted and don’t have a place to go, or even a home anymore. How do you think this crisis can be solved?
B: Everyone should not be mad at each other even if you have different religions, and they should stop the fighting in Syria. If there was no war in Syria, then people would want to stay, or even go on holidays there.
M: Yes, the cause of the conflict is the struggle for power and control, so that needs to be sorted out first so that Syrians have a safe and peaceful country to call their own. How did you feel after we read this?
B: It made me feel sad, but also grateful because I have a house, food, education and a family. They had that too, but then they have to give it up to save their lives. Some people lost their children, or parents, in the war or when they were running away.
M: Do you think you can help in any way, even though Syria is so far away?
B: It makes me want to help refugees by giving them food, toys for the kids and money.  You know, regular stuff that people would use, maybe like donating a Box of Hope, but to refugees.
M: Thanks Ben. I think we need some light-hearted entertainment after that bit of heavy reading. Do you want to watch TV?
B: Yes, Full House please!