“In a fishing village by the sea, there is a small house.” 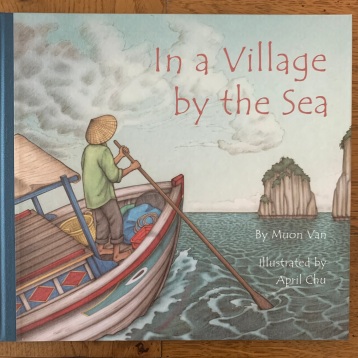 Growing up, I’d never lacked for books but I’d also never read any stories that reflected my Asian heritage or experiences. It was not until I was much older that I realised how greatly my worldview had been shaped by a foreign (read: British) influence and how little knowledge, pride and appreciation I had for children’s stories told by Asians. I have avowed to remedy this, not only for myself but for my own half-Malaysian children, and I am always on the look out for picture books that are proudly and unapologetically Asian. In a Village by the Sea is one such recent discovery, a gentle and sumptuously illustrated ode to fisherfolk in Vietnam.

Dawn breaks and the fog lifts. So begins the day of fisherfolk in Vietnam. Wearing their non la (traditional conical hats made of palm leaf), the men have set off to sea in their wooden boats. Some have unfurled their gauzy nets close to the sandy shore, while others are steering their vessels further out into the swelling waves. The surrounding limestone karsts and isles are breathtakingly beautiful, but perhaps the fisherman no longer see them as they leave their families and venture into the open seas, not knowing what fate has in store for them.

The protective eyes painted on the prow of one particular fisherman’s boat are slanted, almost half-asleep, as the vessel moves towards the ominously dark clouds in the horizon. Our gaze shifts to a wooden house, perched on the side of the tall cliffs and nestled among lush green leaves and fronds. Brightly lit lanterns hanging from the eaves swing in the briny breeze and a large dog with a long tail looks in through the open window. It is the fisherman’s house. Unbeckoned, the dog leads us inside, almost as a narrator for the minimalist text that accompanies the extraordinarily detailed and lovingly rendered illustrations. A wood fire burns merrily, casting golden light on a woman who sits contemplatively at the kitchen table, grinding herbs with her pestle and mortar. Lost in her own thoughts, she is surrounded by some of the basic ingredients for noodle soup, the ultimate Asian comfort food: beansprouts, Thai basil, garlic bulbs, limes, red chillies, coriander and spring onions. The dog looks up as the noodles simmer in a large pot on the wood stove, and smiles at the woman before padding over to the baby in the basket. The child coos with delight as the dog licks the soles of its bare feet.

The dog then takes us to a small hole in the floorboards from which emanates a luminous white light. Inside the hole is a brown cricket, busily at work with paint and paintbrushes. The insect is creating a picture of a sea storm. Lighting flashes from one paintbrush as another brush drags the murky grey clouds lower over the churning sea. Turning the page, we realize that the cricket’s painting is mystically prophetic as the fisherman’s boat appears in the next spread, tossing helplessly in a maelstrom of waves. The fisherman gazes up at the threatening sky, an open metal box in his hands. In the box is a photograph of a his family – a smiling woman and a child and a strong, silent dog – who await his return in their house in the village by the sea. The story comes full circle like a lullaby, with the cricket predicting a peaceful ending to the day in a final masterpiece.

The picture book was inspired by the author’s personal background, having a father who worked at sea as a fisherman and a shrimper, and a mother who managed the household while raising nine children. Even in this increasingly wi-fi-ed and intimately connected world that we live in, none of us know for certain how each day will end. All we can do is live each moment fully, with love, kindness and presence, and let the crickets get on with their drawings.