“Tracing the constellations his father had taught him to recognize, he wondered if somewhere under this night sky his father was looking up and thinking of him.” 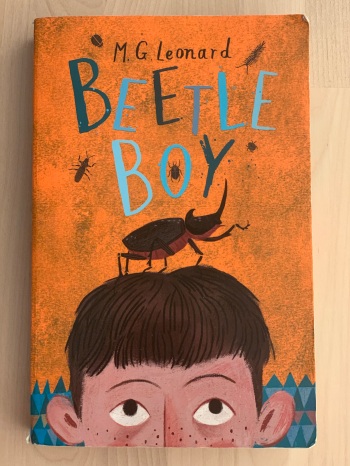 My paperback edition of Beetle Boy has colourful and intricately designed beetles printed on one of its edges. If I must be honest, that is what drew me to the book when I picked it up at a Waterstones in London several years ago. What drew me to it this time around was my desire to introduce my 9 year old to more challenging adventure-driven middle grade stories. This is what Ben thought.

M: Can you tell me what Beetle Boy is about without spoiling it?
B: It’s about a boy called Darkus whose dad goes missing. Darkus, his Uncle Max, and his friends, Virginia and Bertolt, are trying to find out where he went. Did he get kidnapped? And how did he go missing?
M: I see. So this is a Missing Person mystery. What is the protagonist like?
B: You mean the main person? Well, Darkus is a nice boy because he really wants to find his dad, and he’s smart because he comes up with all sorts of plans.
M: Is he your favourite character in the book?
B: Err, no, I don’t actually have a favourite character. I don’t know why.
M: OK then, why don’t you name me some characters that you remember and why they are particularly memorable to you?
B: There’s Bertolt, a nerdy kid, and Virginia, who is really sporty.
M: These are the good guys, right?
B: Yeah. Should we tell people about the bad guys?
M: That might be helpful.
B: Well, the main villain is Lucretia Cutter who used to be a scientist but is now a rich fashion person. She always wears dark glasses and a laboratory coat and wears gold lipstick. She has walking sticks, but they’re not really walking sticks, they are …
M: Hmmm, I don’t think we should give too much away. No spoilers, right?
B: Oh yeah. Well, she’s the main evil person. There are two other bad people, Humphrey and Pickering, but they don’t really work for Lucretia Cutter. They’re Darkus’ neighbours and they are rude and they always fight with each other.
M: So what about the beetles, like in the title of the book? Are there beetles in this story?
B: Yeah, because Darkus finds a beetle who can understand humans. For example, if Darkus tells the beetle to do a loop-de-loop, the beetle does it, so it can follow human instructions. Basically, the beetle becomes Darkus’ pet and he gets called Baxter after like, a soup box or something.
M: I see. Is Baxter the only human-like, intelligent beetle?
B: No, there are some other clever beetles that they find that become pets of Bertolt and Virginia, and they all end up working together to try to find Darkus’ dad, which …
M: Ah ah ah! No giving away the end now.
B: Oh yeah. It’s hard not to give away the ending!
M: Did you learn anything about beetles after reading this book?
B: Umm, well. Maybe that there are lots of types of beetles? My favourite was the Goliath beetle because it is very big and it has a cool name. But it is really sad because in the end …
M: OK, I think we can wrap this up now. So, would you recommend this book and why?
B: Yes, I would because it’s a scary book, but still pretty interesting and you keep wanting to turn the pages to read it.
M: Lastly, three words to describe the story.
B: Ummmmm. Intriguing. Worrying. Funny, but only sometimes. Can I play with my Switch now?
M: [Eye-roll]