Journey To the River Sea by Eva Ibbotson 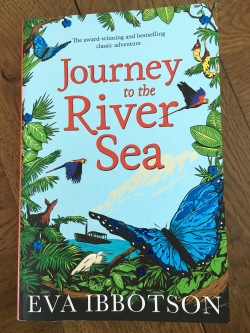 And so we are whisked away on a journey with Maia as she leads her new big life in the jungles of the Amazon.  Under the watchful eye of Miss Minton, her stern but well-meaning governess, Maia discovers that her adoptive family is loathsome in every way. Mr Carter has a macabre hobby of collecting human glass eyes, Mrs Carter has a pathological fear of insects (and of the jungle generally) and all the worst childhood traits are embodied and duplicated in the form of the Carter twins, Beatrice and Gwendolyn. Fortunately, Maia’s fortitude, intelligence and kind-heartedness attracts similar characters to her like moths to a flame. In the humid festering heat, she befriends Clovis, an actor on the cusp of puberty, Finn, a child fugitive, Tapi, a sullen housemaid, and Professor Glastonberry, a dusty museum curator.  All the characters in the book, major or supporting, human or otherwise (there is a giant sloth skeleton that plays a fairly important role) are distinct and wonderfully described in language that is deceptively simple and thoughtful.  We discover that not only Maia, but Clovis, Finn, Miss Minton even, they all have it within themselves to “lead big lives.” At the end, we feel as if we have accompanied them all for part of their individual (but connected) journeys, and we are all the more thankful for it.