The Internet suggests that September is also known as Read a New Book Month so while we weren’t able to independently verify this, it sounds good enough for us and we’re sticking with it.

Come to think of it though, what exactly is a “new” book? One that’s just been awarded Children’s Book of the Month by Waterstones (that would be The Murderer’s Ape, a spell-binding adventure story featuring a brilliant gorilla)? Or one that has just been published and is touring the world (those honours go to Illegal, a powerful and moving graphic novel about the refugee experience)?

Or is it a classic tale that is cherished and rediscovered anew, like Bridge to Terabithia  (which I read when I was a teen and then again when I was much older, as a mother of young children, and both times, I wept)? Or a classic that I never knew such as A Long Way from Chicago by Richard Peck (soon to be reviewed) (which I learned of, and read, after the death of the author, and enjoyed every word)?

Perhaps a “new” book is one that explores an unfamiliar subject matter, such as death – Duck, Death and the Tulip  – or a book that deploys a unique style of storytelling, such as a wordless picture book – small things – or a book that combines exquisite paper art with a story, such as a pop-up book – Little tree/ Petit arbre.

Whatever “new” means to you, this September, read a book. What the heck, read several.

We know we want to.

Jet-lag is great for reading 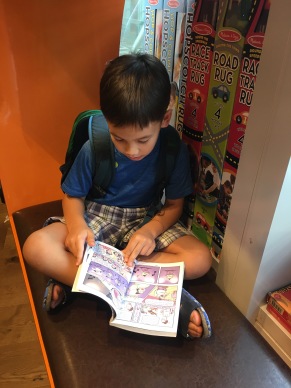 A bookshop is one of the best places to read