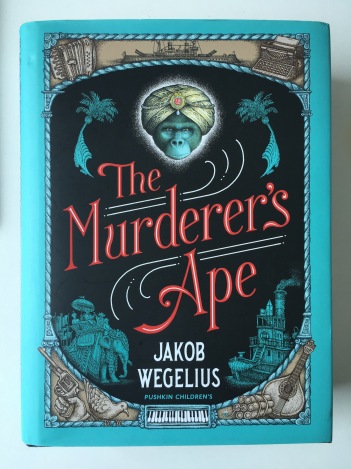 “Human beings have two names, a first name and a surname, but I’m a gorilla and I just have the one name – Sally Jones.” – The narrator, an anthropoid ape.

The beauty of this book is what strikes me first. It has a bright turquoise framed cover, gorgeous maps as endpapers, detailed black and white illustrations throughout the almost 600 pages of uncoated paper, and pleasing fonts.

Then I get stuck into Sally Jones’ story – an old-fashioned murder-mystery that is chock-full of fabulous characters, sea travel to exotic locations and suspenseful moments – and I am captivated.

Primate narrators are not as rare as you’d think (see the equally compelling The One and Only Ivan ). Sally Jones however, is uniquely talented. She’s a seasoned seafarer with superior intellect. She’s a tinkerer and a quick study. She has high emotional intelligence, and she’s gentle, patient and loyal.  Above all, she’s a damned good storyteller.

The story is set in an undisclosed time period, well in the past. Sally Jones’ owner, seaman Henry “Chief” Koskela, has given her an old typewriter to fix, which she does. The gorilla then uses it to write her own, first-hand account of the tumultuous events that led to the following:

ONE – their steamer, the Hudson Queen, to be wrecked at the bottom of a river;
TWO – the Chief to be incarcerated in a Portuguese jail for a death he did not intentionally cause; and
THREE – Sally Jones to become (in turn) a fugitive, a darner of socks, a fixer of accordions, a ship’s grease monkey, a chess player, a spy in a maharaja’s zenana* and a de Havilland aircraft technician.

With her owner in prison, Sally Jones must rely on her wits, her instincts and the kindness of strangers to solve the mystery of the thin-faced man and to discover the truths that will free the Chief and return her formerly idyllic life to her.  Her adventures take her from the seedy ports of Lisbon, along the northern coast of Africa through the Suez Canal, and around the Horn of Africa to the colourful cities and towns of India.  Her keen powers of observation allow her to recount her escapades with rich detail and with simplicity and honesty.

There is an endearing, almost childlike quality about her, but there is nothing childlike about some of what she observes: “hollow-eyed streetwalkers,” dark bruises on her friend, Ana Molina’s arm after Ana’s abusive fiancé pays her an overnight visit, a drunken sailor passed out after an evening at a bordello, and the lush, opulent lives of the Maharaja of Bhapur’s 18 wives and 46 concubines.  Which makes The Murderer’s Ape a middle-grade read suited for those at the older end of that range, unless there is an age-appropriate way of explaining what a “bordello” is to an 8 year old (let me know if there is!).

*Part of an Indian household reserved exclusively for womenfolk.