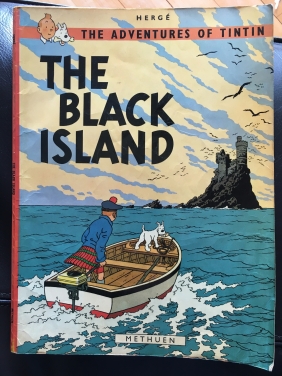 My love for comics began at an early age. I was likely 5 or 6 when I excitedly pored over my first Tintin adventure, The Black Island, bought for 75p from the local WHSmith.

I still have my original copy from over 40 years ago, now yellowed with age and curled up at the edges. As I turn the pages, I am a child again, wide-eyed as I follow the baby-faced Tintin and his trusty sidekick Snowy as they stumble from one mysterious circumstance to another – a stalled aircraft in a field, a passed-out passenger in a train, an ambush by a gang of well-dressed crooks, a runaway train, a ruined castle on an island that gave the comic its title.

Ultimately, Tintin and Snowy succeed in thwarting the gangsters and solving the mystery of the supposedly haunted island. All’s well that ends well.

Despite the frequent attempts on his life, Tintin is unflappable, never doubtful of his ability to seek out the truth. He is also extremely lucky as he never seems to suffer anything more than a concussion that is then cured by a day or two in hospital. Comic relief is provided by the bumbling plainclothes policemen, Thomson and Thompson, a pair of rather dim-witted twins who sport matching moustaches, black suits, bowler hats and walking sticks.

In later books, Tintin’s cast of characters is rounded out by the incurable alcoholic, Captain Archibald Haddock, the absent-minded and near-deaf Professor Cuthbert Calculus and the appallingly loud and melodramatic opera singer, Bianca Castafiore.  The settings are varied and exotic, from the scorching Sahara desert (The Crab with the Golden Claws), the jungles of Latin America (The Broken Ear)  and the snowy highlands of Tibet (Tintin in Tibet). The illustrations are incredibly detailed, with clean lines, expressive figures and bold, bright colours.

My advice: best get the entire set for those rainy afternoons at home.

For ages 6 and above.