“In a kingdom of warriors, the smallest warrior was Princess Pinecone.” 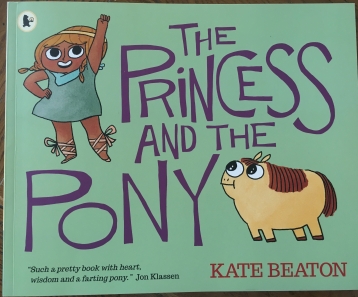 We all know someone like Princess Pinecone. Heck, we’ve all BEEN someone like Princess Pinecone. You know the feeling? When you’re seven years old, and convinced that you’re small, uncool, and insignificant while everyone else is smarter, stronger, and so much more accomplished.  On top of that, you never, ever get the specific thing that you ask for. EVER. Especially from your parents (and in particular at Christmastime). Do I sound bitter?

But Princess Pinecone is unlike me when I was seven.  She is not bitter at all.  In fact, she is the sort of child who makes lemonade – with crushed ice, some fresh mint and a twist of peel – when life does nothing but relentlessly slug lemons at you.  She stoically accepts the fact that for her birthday, her parents have given her a pony that is too small to ride, too simple to neigh and too rotund to do much else except totter after her, stare blankly at her from enormous round eyes, stick out its tongue and fart mercilessly.

While on the subject of the pony, I should point out that its defining feature and – SPOILER ALERT – what ends up saving the day, are its magnificent eyes, with dark pupils that float in the centre (and sides) of the saucer white circles.  My earliest experience with pictures of eyes looking in different directions and how effective they are in illiciting snorts of laughter is when I was a child in Ipoh, absorbed in the incomparable graphic novels by Malaysia’s comic hero, Lat (check out the review of one of his books, Town Boy, on this site).

I must also confess that I have a soft spot for Kate Beaton. I discovered the Canadian humorist’s Hark! A Vagrant (not a children’s book) some years ago.

From Hark! A Vagrant by Kate Beaton

It was a delightful, yet humbling experience to be confronted with laugh-out-loud, slightly warped yet intelligent comics that had underpinnings in history and literature. As such, despite my general dislike of flatulence in children’s stories, including The Princess and the Pony – a coarse and unimaginative sales device, in my view – I will forgive Ms Beaton this one transgression.

So what does the diminutive but plucky royal warrior, Princess Pinecone, do with her cosy sweater collection and her dwarf pony? You’ll just have to read the book to find out.