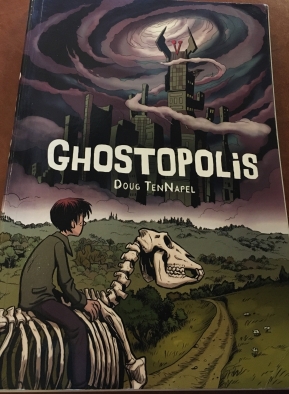 “It was all built by one man, a mysterious Tuskegee airman named Joe.  He made every mountain you see, laying one chunk of sand at a time. He stacked every brick in Ghostopolis so that ghosts would have a place to live.”

An unscripted poke-about in an indie comics store in Toronto last summer led me serendipitously to what is now one of my favourite graphic novels, Ghostopolis. If you’re looking for a riveting, action-packed story that combines realistic fiction with elements of fantasy and the macabre, features compelling characters and concludes with multiple satisfactory endings, then this book is for you.

One of the key differences between Ghostopolis and other graphic novels of its genre is that while the central protagonist is a terminally ill young boy named Garth Hale, an adult shares almost equal billing.  Frank Gallows is a washed-up agent of the Supernatural Immigration Task Force.  An unkempt and unshaven fellow in a crumpled brown suit, Frank’s job is to catch ghosts who try to remain in the world of the living, and return them to the world of the dead.  His pursuit of a skeleton mare goes disastrously wrong, and Garth – who is dying but not yet dead – is accidentally sent into the afterlife.

The dead inhabit a parallel universe overrun by zombies, mummies, specters, wisps, skeletons, boogeymen and goblins.  These are the inhabitants of Ghostopolis, members of the Seven Kingdoms of the Afterlife.  Their ruler is the sallow, white haired and ear-ringed Vaugner, an imposing, towering figure with Machiavellian tendencies. Vaugner’s iron rule is enforced by his thuggish insect henchmen, who are dim-witted but effective.  Ghostopolis is a living hell for the dead. So far, so simple.

But Garth finds out, with almost devastating consequences, that death, like life, is much, much more complicated than that.  As Frank, Garth’s mother and others on Earth frantically organize a rescue mission, the young boy discovers that (A) he must keep his wits about him, and (B) he needs the help of others if he is to survive the afterlife.  Skinny, the skeleton nightmare, becomes Garth’s unlikely pet and steed.  Cecil, a young boy-ghost in a bomber jacket and vintage aviator goggles, saves Garth from becoming insect feed and helps him navigate the unfamiliar terrain.  As Garth peels back the layers of history that envelope the living (and dead) around him, he comes to appreciate them as well as the strange power that he possesses within him.  It is this power that Garth harnesses in the end to save himself as well as everyone that he loves.

It is impossible to fully describe all the wonderful characters and plots in this imaginative and grittily-drawn comic, but Ghostopolis really does have something for everyone. A seemingly doomed love affair. A kick-ass female lead. A spurned lover turned rogue. A regretful grandfather. A loyal pet. A mythical God-like figure called Joe (a towering airman with African American features). A noble sacrifice. Exotic cuisine (giant tarantula on a stick, mustard optional). A werewolf fortune-teller. Witty repartee (“even my wedgie has a wedgie!”). Time travel. I could go on. But I won’t.  Just read it for yourself.