“Do you have light brown skin like I do or smooth gray skin like a dolphin or spiky green skin like a cactus?” – Alex Petroski, posing a question to aliens. 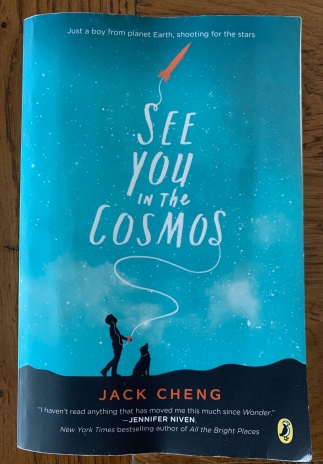 Alex Petroski is eleven. He has a troubled mother, an absentee older brother and an adopted stray canine named after his hero, Carl Sagan. He is obsessed with rockets and he dreams of sending one into space. Inside the rocket, there will be an Ipod with his voice recordings about life on Earth, a gift to sentient beings outside of humankind’s own orbit. Alex himself is a gift. He is the infuriating yet loveable little brother you wished you had, and one of the most endearing, amusing and authentic voices in recent middle-grade realistic fiction. In See You in the Cosmos, Alex uncovers the heartbreaking truth about his past and his present, yet finds the courage, optimism and humour to face it all.

Alex’s story begins with lots of questions. What do the alien life-forms listening to the recordings look like? Where do they live? What shows do they watch? As his spray-painted Golden Ipod records Alex’s words, he tells us, the eavesdropping readers, about his life in Rockview, Colorado. His mother watches a lot of television and has “quiet days”. He hasn’t seen his twenty-four year old brother in a year. His father is dead.

Alex chatters on about the solo trip to New Mexico that he will soon make, accompanied by his dog, Carl Sagan.  He is going to attend a rocket festival where he will attempt – with other space enthusiasts – to launch a home-made rocket into space. Anyone with a middle-grade child knows how computer-savvy kids are these days, so it isn’t a stretch that Alex is an active member of an online rocketeer community (who comes to his aid later on in the story) and is able to secure his own train ticket to the desert event. He packs up and leaves with Carl Sagan, but not before making sure that he’s made enough food for his mum, packed away in tupperwares. Alex is excited but nervous about his first trip away from home. We are excited but anxious because Alex’s stream-of-consciousness recordings have afforded us glimpses into his life, and those glimpses are troubling.

In the ensuing days and weeks, Alex’s rocket mission turns into a quest to find his father whom he had presumed was dead. But maybe not? With his newly-found rocketeer friends – Zed, who is bald, non-speaking and robe-wearing, and Steve, Zed’s roommate and a small-time hustler, who has a goatee and drinks Red Bull – Alex crosses the country to Las Vegas where a vestige of his father remains. There, he meets Terra, a young woman whose own past connects her to Alex, and from there, our young hero travels on to Los Angeles to find his older brother, Ronnie. As Alex’s journey of discovery unfolds, his possé of friends add their own voices to the Ipod narrative. Slowly, but surely, the pieces of the puzzle begin to magically fall into place, creating a fascinating but poignant picture of a little boy who didn’t even know he was lost until he is found.

The monologues and dialogue, sometimes laugh-out-loud funny but always compelling, are extremely well executed and so REAL (UPPER CASE used sparingly and skilfully deployed) such that the reader cannot help but fall in love with the guileless, warm-hearted, intelligent, curious, humorous, courageous and adorable Alex. Simply out of this world.